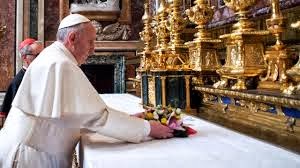 The Latin Mass Society in Clifton

Welcomes you to this blog. Gloucestershire is situated in the South West of England in the Diocese of Clifton. The purpose of this blog is to highlight the extraordinary form of Mass in this part of the diocese.


The Latin Mass Society is a founder member of the International Una Voce Federation. In a message to the Federation dated 25th July 1996 Joseph Cardinal Ratzinger, Prefect of the Congregation for the Doctrine of Faith, said:

"The International Una Voce Federation has played an important role in supporting the use of the 1962 edition of the Roman Missal in obedience to the directives of the Holy See. For this valuable service I express my gratitude to the members of the Federation and extend my blessing." (Pope Benedict XVI).